Thermal plume monitoring is usually conducted in order to measure the temperature plume associated with a plant’s cooling water discharge. Mapping thermal plumes can be achieved in two ways, in situ mooring or boat-mounted plume surveys. Most of the time these two methods are used in conjunction to provide an accurate and detailed plume mapping. The in situ mooring usually consists of three thermistors measuring the temperature at different depths. Combined with the in situ mooring, CTD casts can also be used to get better vertical resolution of the thermal plume. A boat-mounted thermal plume survey can trace the horizontal aspect of the plume. OSI has designed a fast response temperature thermistor system for these surveys. 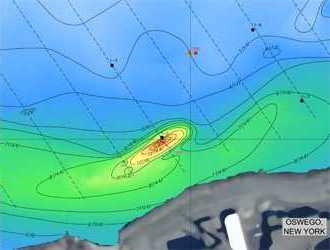